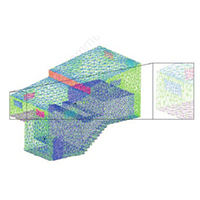 This study aimed to analyze the effect of the area size and location of openings for natural ventilation on the temperature and relative humidity inside a typological facility for coffee wet processing that have been using in Colombia and some South America Countries as well, with mechanical drying inside, using modeling with computational fluid dynamics modeling, in order to find the best suitable condition for preserve the quality of the coffee parchment. A significant effect was found regarding the area and location of the openings for natural ventilation on the internal hygrothermal environment, but no significant effect was found on the temperature. It was also found that the chimney effect plays a decisive role in the mass transfer of water vapor and heat to the outside of the building, and helping to maintain a suitable internal environment for the preservation of coffee.

Coffee is one of the most important beverages, behind petroleum, coffee is the world’s second most valuable traded commodity (Garcia et al., 2014).

In regions like Colombia, Central America and Hawaii, Arabica coffees are processed via the wet method, and sun-dried or mechanically in order to reach a moisture content between 11-12%; the coffee is dried in the interest of maintaining its quality and storing it for extended periods of time (Ciro et al., 2011; Ghosh et al., 2014; Wei et al., 2015). Otherwise, microbial contamination could occur in the cherries and during the harvesting, fermentation, drying and storage of coffee beans (Silva et al, 2008; Oliveros et al., 2013). Bacteria, yeasts and filamentous fungi have been reported in the pulp and coffee beans processed in Brazil, India, Hawaii, Congo, Argentina, Colombia, Costa Rica, Ethiopia and Mexico (Silva et al., 2008). Filamentous fungi predominate at the end of processing and during storage, with effects in terms of the flavor and aroma of the beverage, but fungi also present a safety risk to the final product, due to the production of toxic secondary metabolites, i.e. mycotoxins, which can be harmful to consumers at certain concentrations (Taniwaki et al., 2006; Paterson et al., 2014).

The indoor environment conditions of the place where parchment coffee is stored (warehouse of storage or facilities for processing of coffee) are very important. Fungi live and reproduce best between 70 to 80% relative humidity, whereas yeast and bacterial development require humidity higher than 85% in the intergranular air (Navarro et al., 2002). The biological risk is latent in facilities carrying out the wet processing of coffee; for instance, Aspergillus ochraceus was found in 70% of the facilities tested in Colombia, including coffee post-harvest facilities, solar dryers, coffee parchment and green coffee.

In the tropical zone, with temperatures higher than 27°C and relative humidity above 70%, freshly harvested beans and processed grains could be attacked by insects common in storage (Navarro et al., 2002).

In Colombia, approximately 70% of the volume of coffee is dried mechanically (Gonzalez et al., 2010; Osorio et al., 2016a). This process generates a lot of water vapor and heat into the facilities. In post-harvest coffee processing, the greatest power consumption occurs in the mechanical drying process, which has an efficiency of 50% (Oliveros et al., 2013).

Design errors and poor control of coffee processing facilities can compromise the quality of the coffee beans due to an inadequate thermal environment (Osorio et al., 2016a). The bioclimatic approach of buildings in warm and wet tropical regions requires previous bioclimatic work, analyzing the envelope to limit the power contributions and optimize the flow of air from natural ventilation (Bastide et al., 2005).

The aim of this study was to analyze the effect of the area and the location of openings for natural ventilation on the temperature and relative humidity inside a typological facility for coffee wet processing in Colombia and some south America countries.

This study was conducted in Antioquia State of Colombia, at coordinates 6°26’15”N, 75°19’50”W, 1700 m altitude, average temperature of 22°C (in November), in a typically facility for wet processing of coffee, oriented east-west, with a coffee cherry production of about 156250 kg year–1 (31,250 kg year–1 of parchment coffee). The internal environment of the building was simulated for the month of November, during the main harvest of the year, which coincides with the second rainfall season in this part of Colombia (Oviedo et al., 2014), that is the most critical situation for operability conditions of the coffee buildings.

Figure 1 shows a geometry of installation for processing coffee. This facility has two floors (of equal size) in stepped form. On first floor is a mechanical drying area, and second floor is an area for pulped, fermented, and to classification of coffee. The dimensions of this building are: 5.50 m wide × 9.50 m long × 4 m high. The building has 15 cm of unplastered brick cladding (thermal conductivity 0.72 W.m.°C–1), with two windows on western side of 1.15 m × 0.6 m, and a window in roof discontinuity of 4.80 m × 0.30 m. The windows remain open all time (unglazed). The roof was made of fiber cement tiles (slope of roof 20%, thermal conductivity 0.28 W.m.°C–1).

The constant values input used in the simulations, corresponded to the most critical conditions during the day: the heat exchange drying machine uses coal (anthracite) as fuel, which, according to (Oliveros et al., 2013), has a consumption of 0.224 kg of coal per kg of dry parchment coffee, with a calorific value of 33440 kJ kg–1. The mechanical dryer of this building has a drying capacity of 1125 kg of parchment coffee per day. The mass flow of steam produced was average 0.05 kg of water.sec–1, and its temperature was 30°C. Floor temperature was between 20-23°C and average outdoor temperature was between 22-25°C. For the air conditions the thermal conductivity of 0.02551 W.m.°C–1, and thermal diffusivity of 2.141 × 10–5 m2.s–2 was assumed (Cengel, 2007).

The 3D geometry (1:1 scale) of the facility for coffee wet processing was developed in computational domain using a CAD tool. The geometry was then imported into software ANSYSR ICEM CFD (version 13) for development of a tetrahedral mesh consisting of 15,287 nodes and 74,514 elements (Figure 2) ), obtained after several refinements and mesh tests. When the geometries are complex, or the range of scale lengths is large (as in this case), a tetrahedral mesh is generally appropriate, which requires a smaller number of elements.

CFD-based computer models help with the visualization of scalar and vector fields of indoor environments by means of solving a set of equations that describe fluid flow, commonly known as the Navier-Stokes equations (Osorio et al., 2016b). Turbulence was modeled using the standard k-ε turbulence method, which evaluates the viscosity (μτ) from a relationship between the turbulent kinetic energy (k) and the turbulent kinetic energy dissipation (ε). It was used as a criterion to define solution convergence, i.e. a mean square error (MSE) of the smallest solution of 10–4.

The CFD simulation of the facility coffee carried out in the present work have the follows considerations: i) the steady state was used to validated the computational model with the experimental values; ii) incompressible flow; iii) turbulent flow; and iv) people heat flux was neglected.

Different options for natural ventilation openings were simulated in order to determine the influence of vent area and the location of the openings on the temperature and relative humidity inside the facility. The different treatments can be seen in Figure 3. Treatment 1 (control) is the original geometry that was validated and simulated, while other treatments were different options of area and location of the openings for natural ventilation, including the use of a skylight of 1.0 m × 1.0 m with an opening of 10 cm on the roof over the drying machine (treatments 8 and 9).

The results from the CFD model (T1 control) were verified and compared with the corresponding experimental measurements. Concordance between the measured values and those described by the CFD model were also evaluated, calculating the normal mean square error (NMSE) recommended by the American Society for Testing Materials (ASTM, 2002) (equation 5). For this, the average of the 15 points of temperature data and the 15 points of relative humidity data was calculated. Values with an NMSE less than 0.25 were accepted as good indicators of concordance; as this value approaches zero, the concordance between measured and predicted values is greater. For the statistical comparison of different treatments, a statistical analysis of variance (P<0.001) and post hoc test (Tukey, P<0.050) was performed for the analysis of temperature and relative humidity.

A comparison between the data obtained by the model and the experimental data of the control treatment showed an NMSE of 0.0031 for temperature and 0.0025 for relative humidity, indicating good agreement between the results (Table 1). It was concluded that the proposed model can be used to accurately predict the behavior of temperature and relative humidity in the indoor facility.

On the other hand, in T8 and T9, the fact that the skylight was located on the same axis of the emission source of water vapor and heat (mechanical dryer), the proximity of other openings of the steam emission source, and the chimney effect (process by which air, when heated, becomes less dense and rises) played the most important role in the removal of water vapor, as a considerable decrease in the relative humidity and temperature was observed.

Under the bioclimatic conditions of T1, T2, T3, T5, T6 and T7 the biological risk was latent, as these conditions presented a relative humidity above 85%, which can increase the risk of bacterial growth (Navarro et al.,2002).

The treatments T4, T8 and T9 presented conditions with lower relative humidity (mean of 75.9%) than others ones, and this relative humidity could be constituting less risk to the final product, due to the production and proliferation of filamentous fungi which can adversely affect the quality of the final product, due to the production of toxic secondary metabolites, i.e. mycotoxins, which can be harmful to consumers at certain concentrations (Taniwaki et al., 2006; Paterson et al., 2014).

Figure 4 shows the profiles of temperature and relative humidity inside the facility for treatments T1 (control treatment), T4 (two windows near the steam outlet of the drying machine), T8 (original configuration + skylight) and T9 (T4 configuration + skylight), that were the treatments that had lower relative humidity and temperature than other ones. It was observed that, in general, temperatures above 300.15°K (27°C), risking insect attack (Navarro et al., 2002; Taniwaki et al., 2006), occurred only near the vapor outlet of the drying machine in all treatments.

CFD modeling proved to be and useful tool for the bioclimatic analysis of facilities for coffee wet processing, where a significant effect of the natural ventilation area and position was observed in terms of reducing the relative humidity and temperature inside the typological facility investigated in this study, providing a suitable bioclimatic environment for preserving the quality of coffee.

T4, T8 and T9 treatments presented the best bioclimatic conditions, suggesting that make these changes in the buildings for coffee wet processing, as locating the openings close to emission sources of water vapor and heat, and increase the ventilation area, could improve conditions to preserve grain quality of this typology facility in Colombia and some south America countries.

is the official journal of the Italian Society of Agricultural Engineering and it is published online by PAGEPress®, Pavia, Italy. Registered in Pavia, n. 9/2012. All credits and honors to PKP for their OJS.